I've written quite a few times about this all being a waste of time. And how, after a few years of tracking response, I've found that efforts placed into social media aren't worth what you get out of it - unless you systematically make it a one-minute job posting or answering. It's this latter item I've concentrated on.

While Audio Graphics uses Facebook, Google+, and Twitter, the amount of time spent posting is less than one minute (to do all). There's no wasted motion, no time spent thinking about what needs to be said for each. (See the upper-right part of this page.) The reason: I spent my time learning how to write the code so readers can click and it's done for them.

That time "learning" was spent because of what's on the following video. I've believed its premise for years and, after viewing it, believe you'll also see why following a radio industry social media guru's advice does nothing more than waste your time reading their words, or following through with action.

Nobody who claims to know social media for radio speaks of the low percentage of followers who see what you post (11%-16%). Nor have I seen any speak of the early December 2013 announcement by Facebook to lower that figure, to push its advertising revenue. It's because these "gurus" don't know that they succeed in writing about social media because their audience doesn't know what they don't know. BS is easy to push in this environment.

Do yourself a favor; sit through these 9 minutes of facts presented by someone who does know. Then, stop wasting time on building a Facebook presence - which does nothing more than promote Facebook. 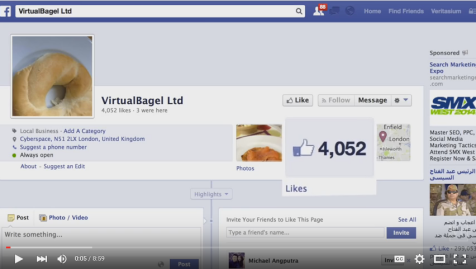 The radio industry - online and off - needs to start comprehending that all which it does online needs more thought, effort, and knowledge than what has been given so far.

Just claiming your are "digital" or "online" isn't good enough when there are millions of people who don't care for radio's pull-the-wool-over-the-eyes digital claims.

Claiming your station has a presence on Facebook with thousands of likes is a meaningless way to use your programming and positioning statements.

Believe what you see in this video. It contains facts based on science and math - something you don't see in radio industry trades.

"Organic reach of Facebook posts by brands has fallen by about half since October as the site pushes paid promotions, according to a Social@Ogilvy report. On average, its clients' organic reach declined from 12.05% in October to 6.15% in February, with pages that have more than 500,000 likes seeing a decline from 4.04% to 2.11%. "Increasingly Facebook is saying that you should assume a day will come when the organic reach is zero," report author Marshall Manson said."

Give Diverse's "New Boy" a listen.