We're not in old times anymore where you have three AC stations, 2 oldies stations, and 2 talk stations to choose from. The online radio station you choose does not need to come from your town. You want audio online? Grab it from literally anywhere on earth.

Relative to radio, online, there's not much variation in radio programming. Most every station sounds the same, with only the I.D. being different. The Jazz host may talk slower than the AC host; but when their mouths open, it's usually the same type of wording which falls out.

Our online radio selections give us a) the jukebox on steroids, b) jabbering jocks who like to swear, because they can, 3) over-produced promotional ads, and 4) the "we play everything and anything" so everybody will like us. In short, except for the swearing, the options sound like most broadcast stations.

What I don't hear when going around the internet to find stations to add to RadioRow.com is "new." Nothing is being presented that breaks the mold of what was, and introduces what will be.

It's been twenty-some years since "new" came through the speakers.

The last "new" in radio was the introduction of 24/7 sports talk stations. I was on the management team that launched the 4th sports talker - WKNR, Cleveland. We had no idea what we were doing. We, and the other three stations, were trying new things to see what fit. Many parts didn't. But we were doing "new." We tried something different until we found our moxie. And note: Many radio insiders laughed at us, but we kept going.

WKNR was the first sports talker to use rock-n-roll as bumper music. It created the 20/20 Ticker, which was copied by WFAN in NY. We tried many things on our way to finding moxie, and failed at most. Eventually WKNR became the most listened-to sports talk radio station in the nation for four consecutive years (Arbitron 1994-1997). We had no program director for the first 5 years.

Last week I added six more stations to the home page of RadioRow: a Hard Rock, Christian, Top 40, Soul, Alternative, and what I call "Shuffle." (The last is a mashup of music.) While representing a cross-section of music choice. When the music stops all sound similar.

Few stations attempt to change the basics of an audio presentation. Fewer are taking a chance to try "new." I hear little moxie.

This "moxie" I speak of is not just in the way an audio program sounds; it also moves through the distribution process. Getting into iTunes, Feedburner, YouTube, or any of the dozens of audio funnels requires its own moxie. Each represents a big ocean, too.

Some of mine include the "Intro to Indie Artists" series of programs.

The above came after building RRadio Music Song Distribution to online radio.

Each is supported by a continuous stream of social media and RSS postings. 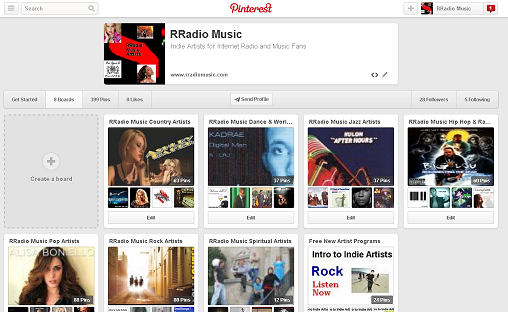 It's my own moxie, of which I knew nothing about prior to exploring new ways of doing old things.

For radio, online, the only sure thing from here is how those stations with name recognition to over 25% of music lovers will not give an independent operator the opening to succeed. The independent will need moxie.

Until online radio stations find their own, they are destined to be just an array of distribution channels, of which few will carry enough "new" to find an audience.

Give The Bigun Brothers's "That Ain't Country" a listen.