The Other Side of Advertising

"How did anyone survive without a fax machine?" For those old enough to remember its advent, this tech item changed business in ways never imagined.

That change is a reflection of the transition that's still being challenged by old media, particularly radio, especially as ears move online. "Radio's reach is unparalleled." So? "Radio taps into the community." We all know that needs to be followed with "sometimes." "Radio advertising is effective." No argument when it's done well. There's a big argument, though, on how often that occurs.

To be clear, radio is radio whether it's online or pulled from a broadcast tower. To be more clear, there has not been much improvement within all of radio - on the programming or advertising side - because much of what was done when the fax machine was introduced is still being done today (with fewer people).


Meanwhile, for radio types, especially those who hold onto its reach and don't seem to understand, this mountain of claims does little for an advertiser wanting proof of an ad's effectiveness. Watching the money move away from screaming audio car commercials to quiet native ads and banners is not often mentioned in radio trade publications, which is why we'll bring it up here.

The last time this topic was bridged I was in the market for a log splitter engine. How advertisers followed my search was amazing.

Today, look at my actions of yesterday to uncover why an advertiser's online options are embraced. Then try to discuss "reach" with a straight face.

Having disconnected from cable in 2011, the wife and I decided maybe it's time to put up an antenna for free TV. On Thursday, 8/6/15 I began online research for items needed; in that group was an antenna rotor, which should give us access to stations from Cleveland, Youngstown and Akron OH, along with Erie PA.

As I began my morning online rounds today, here's what greeted me (note: not in every ad I saw, but enough to matter). Shaded areas added for ease-to-find.

From FoxNews.com, where I went to view comments on the debate, was this. 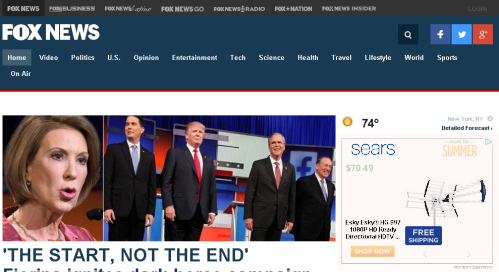 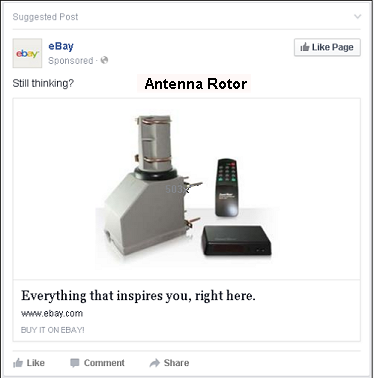 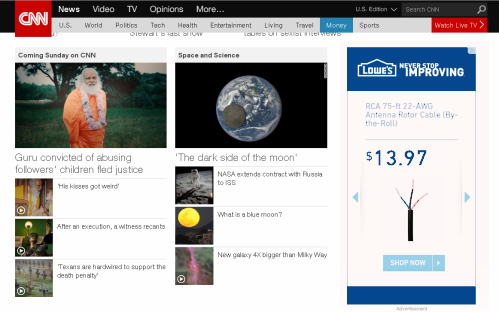 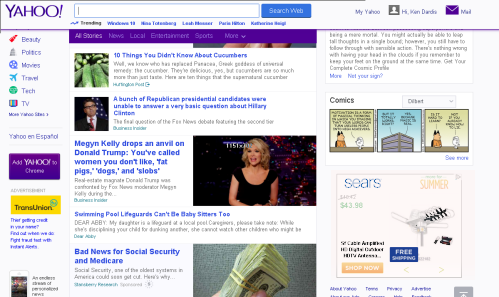 From Linkedin, via an article titled "Radio is Thriving in a Digital World: 90%+ Reach," which featured a link to U.S.A. Today; first the article, next the ad. 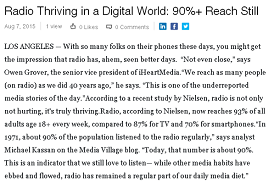 Even radio's own trade publication RadioInk served me this. 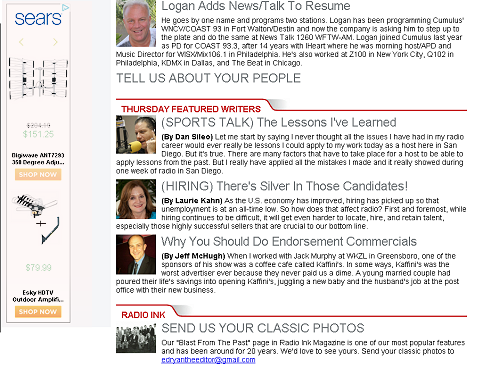 For twenty years the transition has been occurring, obscured to those in radio who truly want to believe it's not.

This demonstration is quite small compared to the billions of ads served each day online. And yet we still hear radio is doing well. You, I, they know that it's not.

While we all continue to wait for Radio Advertising Bureau to release first-half earnings, consider the recent round of radio company revenue quarterlies, and the mostly flat-to-negative reports. Then ask yourself how long serving an impression is sustainable when serving response is so much a part of technology today. (And I'll ask if you're still using a fax machine daily.)

If your answer is that radio delivers reach, there's little anyone can do except wish you "Good night, and good luck." Note that Edward Murrow has left the building along with many former advertisers - and there's little being done in radio to bring those advertisers back.

Today's artist introduction is to Country from Amanda Wilson.

Give "Hands On You" a listen.