CPM or CPA - and Why It Matters Online


The former places responsibility for "drawing response" on the ad's creative, incentive, and audience mindset at time of exposure.

Cost-per-Action puts the burden on the media, as it won't make money until a response is generated. In this scenario the ad will just keep running, and running, and running - each time giving brand exposure for free. And that is the crux of why CPA advertising is considered "the Devil" in broadcast.

CPM is built for "broadcast"; CPA is there to use when you target a niche. But here's the importance for radio: Unless your name is Google (or a similarly-sized ad delivery system), there's not enough revenue in delivering CPM advertising online.

Advertisers, in greater numbers, are beginning to see how people who hold no interest in their product aren't worth paying to reach. Can't really blame them, which is the reason all online radio stations - broadcasters and pureplays - need to use a CPA pricing model. 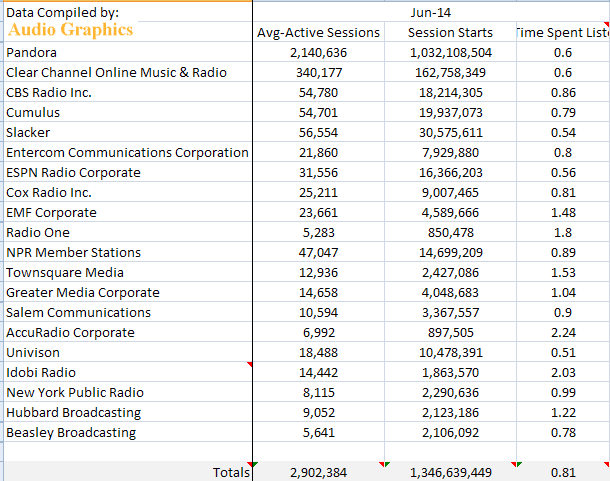 Of the top publicly reported broadcasters and pureplays, there were 2,902,384 Average Active Sessions. To qualify this (as it's usually reported wrong by radio industry trades), Average Active Sessions are not people. It refers to "Total Listening Hours (TLH) divided by hours in the reported time period. TLH is defined as the total number of hours that the station/publisher has streamed during sessions with a duration of at least one minute in total within the reported time period."

To further define this number, 2,140,636 AAS were generated by Pandora. Add the other pureplay operators listed in the reported companies, and 2,218,624 of the total 2.902,384 Average Active Sessions are NOT coming from broadcasters.

Rephrase the above to this: 76.4% of reported AAS are coming from pureplays, with 30.8% generated by broadcasters (683,760 AAS). Of this, 49.7% come from the most aggressive broadcaster online, Clear Channel.

It's hard to accept new ways of doing things. I fought the CPA model of advertising between 1998 and 2002 when I first had the opportunity to buy and digest exactly what it was that Cost-per-Action brought.

I am now a staunch advocate of pricing online advertising by CPA; you can better track and quantify exactly what is being sold with it.

For those who believe radio should never give up its CPM pricing, they are destined to lose the online battle for advertisers. Dig deeper into the June Triton Digital Webcast Metrics report and it becomes clear. (Download Audio Graphics' breakout here.)

For the online stations that wish to make the transition to a CPA model: This is a spreadsheet that helps to establish what you should charge per response. (An explaination of the concept is here.)

CPM is available online through any of hundreds of web sites that deliver millions of impressions a month. But, for radio, via Webcast Metrics, it's obvious radio is not in that league.

Start training your mind to adjust. Cost-per-Action is a viable, needed, ad-pricing model for radio online. In the long run, it will matter which one you choose. Those sticking with online CPM pricing won't be around later to even discuss this.