Do You Notice a Pattern?

Prior to the NAB Show 2017 in Las Vegas, Radio Ink featured Galaxy CEO Ed Levine in an article titled "An Argument For More Deregulation."

Allow me to share this Radio Ink article, dated today, from the NAB RAB Radio Show in Austin: "Warshaw: Radio Needs More Deregulation Now." Reading it I cringed. How much time is wasted regurgitating the same illogical solution to an industry made problem? Is this another episode of selling a "must have" concept like HD Radio?

I penned an article for Radio Ink as a rebuttal to Mr. Levine back then. It can run today with no change, because nothing has changed; even the part about the industry forecasting a flatline.

Trade publications give scant exposure to any negative points about radio, even when valid. So we'll let this stand here.

In 2013, Larry Rosin, President of Edison Research, said: Its not that long ago, when there was a code of omerta in the radio industry, where if you point out a problem, you are the problem. I was a problem prior to retiring in 2014. I spent nearly 30 years working with knowledgeable broadcasters. It was a good time to be in radio. Like many of my generation we went from on-air to sales, sat as newscasters, and managed stations in an industry we loved.

Over the air creativity was exploding, the type not heard on radio anymore. Each station in a market had its own program director, production director, traffic director, continuity and promotion departments, plus six full-time air talents 24/7. Albeit there were rare exceptions, but that was industry SOP. We had the talent and time to make great radio.

[My statements, supported by facts, have pointed to radios lack of a true digital acumen.]

Producing over 10,000 radio and TV commercials, coupled with a fluency in what computers were capable of and how to make that happen (I wrote software code since 1968), led me to early observations about many radio/online initiatives. Some are listed below. All are the basis for why [Ed Levine Jeff Warshaw's] call for deregulation is not workable. In 1996 dereg received a chance, the same as Sweetjack, Radio Heard Here, LMiV, Less is More, and many other radio initiatives since  each failed miserably.

This isnt about operating with an ability to scale or fearing new competition, the logic used by[Mr. Levine Mr. Warshaw] to deregulate further. Business has changed, and we do not need to save radio. Though, we do need change to meet expectations of businesses and audiences served today.

Scaling only works when used correctly, yet radio industry executives are still trying to mold the Internet for their use instead of finding which Internet applications can be best used by radio.

No matter how many stations a group owns, we hear much about creating compelling content, and somehow we nearly always end up with a shallow remnant of past programs. NPRs experimenting is promising; too bad these attempts at creativity are missing from its commercial cousins. (Few who say compelling content know how difficult it is to consistently make it.)

On the advertiser side, when is the last time radio answered an advertisers call for accountability or restructured its pricing model? It was given an opportunity in 2006 with Googles offer to sell available inventory, but radio turned its back. Imagine how much farther along the industry would be in understanding digitals potential if it had accepted a partnership with the one company that appears to dominate Mr. Levines comments.

This is not the time to kick around numbers of how radio is being kicked around. I can supply an equally heavy set of data showing how many boats were missed by the industry, but I retired and am not into researching this as I did for so many years. I do know the data exists.

My last point: If [Mr. Levine Mr. Warshaw] truly wants to make it a fair fight, Im sure hes all for paying performance royalty fees for over-the-air broadcast of music. Non-broadcasters are required to pay for playing music online. The broadcast industrys participation now just seems fair. That would be a good first step to leveling the playing field.

[Allowing fewer owners to control larger numbers of stations will gain nothing, except more of what we've heard since 1996. That, itself, should scare the Hell out of anyone who loves AM/FM radio.

If you challenge that things have remained the same try reading this, originally posted at AudioGraphics.com on October 2, 2000 - for The NAB Radio Show 2000]

Today's artist introduction is to Rock from The Rusty T Band 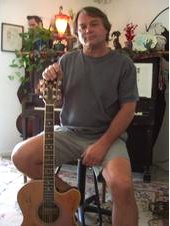 Give "Tic Toc" a listen.