It's not whether the numbers go up or down, because we don't know what's causing those shifts; it could be audience growth, or just more stations being added to any group's portfolio that cause Average Session Starts to rise. Yet, knowing this, we still see reports that radio groups have an increase, or that radio groups have declined.

As a by-the-way: Don't use anything within this report as an indication of how online radio is doing as a whole, because far more major players are not represented than are.

PAASRSS, the "Percentage of Average Active Sessions Resulting from Session Starts" is one statistic which places everyone in the Webcast Metrics report on equal footing; it shows how many people are finding the content worthy of sticking around.

For broadcasters, this latest PAASRSS has good and bad news.

Getting the bad out of our way, iHeartMedia is low - resting at 0.21%. Because iHeartMedia represents a high percentage of stations within the Katz Online Network (now Proxi Digital), that brings Katz's PAASRSS way down (to 0.22%).

Jumping to the good news for broadcasters, 0.21% is also what Pandora delivers.

The inference is that we have the biggest players in this game producing content that's not worth sticking around for. Meanwhile, Hubbard Broadcasting has a 0.40% PAASRSS while idobi Radio sits at 0.73%. What is it that these two offer over the big operators? Spend time at each. It's obvious.

Webcast Metrics' numbers are usually taken at face value. It's easy and meaningless. For instance, one trade reported "#5-ranked CBS Radio..." and that Cumulus is ranked #4. We all need to discuss what this means in a world where response metrics are more a measure of success than the numbers of people listening.

PAASRSS is not an arbitrary number. It defines how well an online station (or group) is doing on the content side, and nobody is paying attention to it.

The internet gives power to count in ways never possible. Why are we not then moving away from the old way of rating success? Another item the radio industry just can't get away from is in the selling of impressions over action. (That's for another article.)

Focusing on new data sets to sell radio in new ways will move radio forward, like uncovering the "how to get a prominent spot" in our new dashboards - which seems to be taking many in radio by surprise.

To still be concerned with where a company "ranks" is old time thinking.

It would be much more impressive to see numbers representing consumer action, like what percentage stick around after they tune in. That's why we need new data sets like PAASRSS. 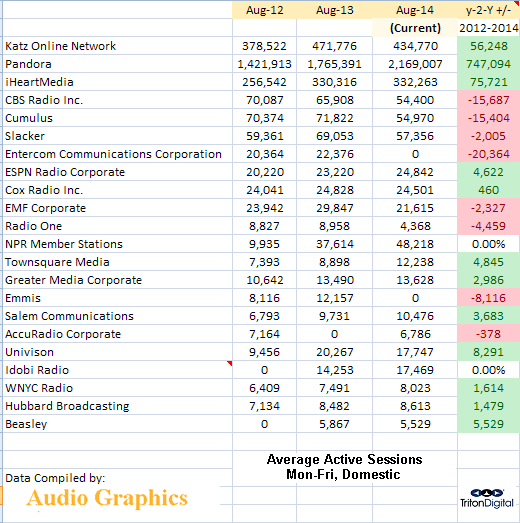