When Should Radio Go Christmas?

It's no easy question to answer: When should a radio station begin leaning on Christmas music? Circumstances vary due to variables like the surge of retailers beginning earlier each year and the economy.

What's plain in the broadcast radio industry is that we hear more radio stations switching to all Christmas formats earlier. Not so plain is what's happening to online radio regarding when it should begin playing holiday songs.

We don't have definitive answers, but perhaps you can draw some conclusions looking at data from Audio Graphics' RadioRow.


As in many analytics, I look at percentage of use for guidance. In this case, it's the percentage of total visitors to RadioRow going to the Christmas Radio Stations page. This chart shows an upswing consistently beginning around "Week 6," which for the past 4 years has been the 3rd full week in November. In 2010, 2011, and 2012, of all visitors to RadioRow during Week 6, those going to the Christmas Station page were 0.6%, 0.5%, and 0.6% respectively. This is how it went in 2014, with Week 6 delivering a 0.9%. But last year was also slightly different - notice Week 5. 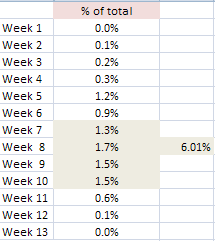 Graphed, as an average over five years, the numbers appear like this. 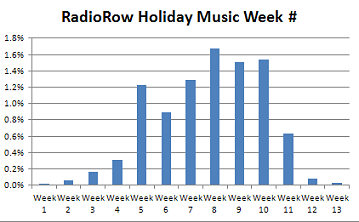 Here's how each year appears. Notice that, online, the audience was seeking out Christmas music much earlier last year.

These numbers show what make the online version of radio so much different than what the radio industry does over broadcast. The data is one reason advertisers are placing more dollars with online advertising that's radio based, or in any of the other accountable forms like video, banners, and text ads on search engines.

Christmas is still another 9 weeks away. Yet, seeing how the people hunting for holiday radio stations at RadioRow are already showing signs of interest, perhaps that's a prompt for an earlier-than-usual move from your station in this direction.

Does the data say you should go "all Christmas music"? No. But it just may be a reason for you to start using a song or two, every now and then.

Today's artist introduction is to Pop from The Spins.

Give "Never Let It Go" a listen.