Your music is unlike anything I've heard and you're getting airplay on a couple of radio stations. That doesn't mean you'll be getting much farther down the road to success without bringing a sense of business to the table. Speak of the business savvy required to expand a fan base, and you identify a quality indie acts need that the majority fail to possess.

Until you're established, you'll not get much response from emailing music portals and online radio stations with messages resembling half-eaten alphabet soup. This is similar to emails I receive: "Attached is a tune... hope you listen and like it! gttng gr8t feedback online - From: Insert Band Name" (You would be saddened to know the number of similarly worded band solicitations I get at RRadio Music.)

Artists pitching their music, showing no common sense when it comes to communication. Giving no reason why I should take time to listen. There's nothing that shows me there's a person on the other end of this email - a name or phone number would be nice.

In the RRadio Music agreement there's a place for a contact name - the person legally responsible for submitting the music. Often the name submitted is "Bill," "Skeeter," or something liken to "BJ." The submitting person should understand how they need to furnish a legal name on an "agreement." That's business-think in action.

I'm not sure if it's an indie artist misplacing their real identity, in lieu of a stage persona, but trying to get airplay using only a stage or partial name screams AMATEUR.

As an independent musician you accept that part which flows with creativity, letting you enjoy a life producing organized noise. There's also the business side, which is required to exploit various publicity routes for maximum exposure. At the heart of this mix is that the process doesn't care how good a song is; there are plenty of great songs.

With the vast majority of independent bands using the internet, self-promotion is becoming more competitive. (Anyone counting on viral distribution has a poor strategy.) Add to this the number of small labels which are just waking up to using a "best practice" approach to online promotion, and you have a better grasp of the growing competition online.

Lacking a business approach keeps many bands from having an advantage when trying to "sell" their music, literally and metaphorically.

More than ever, business savvy is required. How much do you possess?

Today's artist introduction is to Pop from Cloud 9 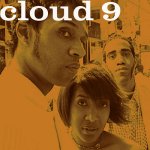 Give "Can't Resist" a listen.