Radio, Streaming, Podcasting and On Demand

The discussion has been brewing in my head for some time: The new perpetual battle for ears is screaming success in four areas (Radio, Streaming, Podcasting and On Demand). Yet, not one is putting out solid data to support claims.

Broadcast radio is still the most listened to, as one would expect. As it was for the horse-to-car, transition to "new" takes decades.

The number of audio streams is increasing at tremendous speed. But view most any webcaster's P&L and it's obvious there's little profit being made. The other telltale sign is that most of those claims are built on the audiences of non-broadcast "radio" - the companies that just a short while ago were being hailed as "not radio": Pandora, Slacker, Spotify, etc.

Podcasting is getting publicity like it did prior to the fizzle of 2005. Back then I wrote: "While the press represents podcasts as the next coming of audio, consider this: In all of the articles you read, there's no discussion of the difficulty in getting media buyers' attention, then presenting them with data that quantifies what the podcaster is selling - its audience."

Scant few names are associated with "success" in podcasting, with "Serial" mentioned in most every conversation.

"On Demand" delivery of everything from curated programs to songs, spoken word talk shows to educational programs, is growing in near direct proportion to youth's drop in time spent with broadcast radio. 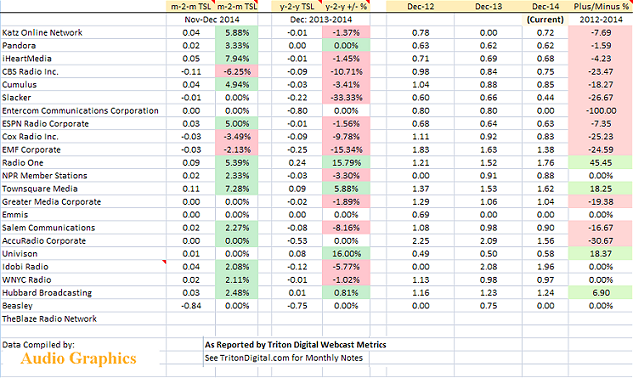 In all of the above, the 1984 Wendy's commercial tag line comes to mind: "Where's the beef?"

We have a concentrated effort by broadcasters to keep the belief high that radio dominates all demos today.

You couldn't read a radio trade publication over the past week without stumbling across a Forbes article by Hugh McIntyre titled "No, Radio Isn't Dead -- In Fact, It's Doing Better Than Ever." The metric that claim is based on appears to be this: "Nielsen released a report last week that states that the second quarter of 2015 has seen the highest number of people tuning into radio ever."

The truth to listening habits is best shown in an unrelated article at Medium.com: "May I Have Your Attention, Please?" Its focus: "The currency of the media business is attention."

This chart gives a good representation of Time Spent Listening distribution across multiple media and, as is plain, digital mobile and desktop are growing at the expense of radio, print and TV. Read the article for more eye opening statements, and to see the chart in full size. 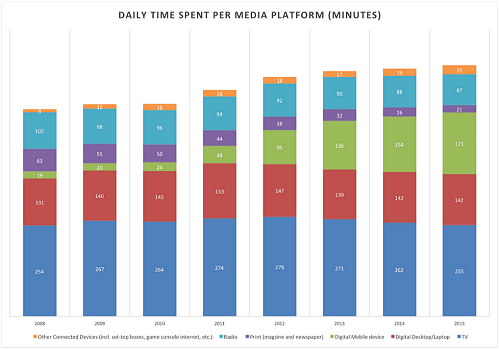 I believe that the listening of two audio sources at the same time is not something anyone can comfortably do. For radio - online or off - if a consumer is paying attention to some other media, they are not listening to you.

It's a fight for time between radio, streaming, podcasting and on demand. If you want the truth, look at what youth are doing as they dictate where all will be by 2020.

Opinion: The road to online audio consumption is so crowded with choice that the chance of producing a hit without major media support (as "Serial" received through "This American Life") is less than hitting the lottery.

Today's artist introduction is to Hard Rock from Bone of Contention.

Give "Fickle Finger of Fate" a listen.